December 14 – So did we go home after the thrift shop? (see yesterday’s post) Of course not! After buying wild bird seed and millet at the farm store, we were off to visit our good friends Clyde and Nan Putnam who have been featured in this blog earlier. One of the first item on the agenda was the recent loss of life in San Bernardino, CA when 14 people lost their lives due to those who decided to do away with them. Of course, we couldn’t think of a reason for that kind of behavior or a solution to the problem. We agreed that this sort of thing is becoming more rampant around the world and that people really don’t care for others. If only they could share in the friendship that we so much appreciate with those we know and have already mentioned in this blog.

“Speaking of friendship,” Clyde announced, “we want you to come out to the kitchen. We have something there for you!” 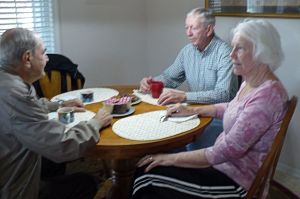 [Tea with the Putnams ]

Now what? They are always doing such nice things for us, and now here was another surprise! Four chairs were set out around the round table. Placemats and napkins were in place, just waiting for us. After we sat down, we noticed that Nan was preparing something that smelled good! “Now what would you like to drink?” she asked. “We know you don’t drink coffee or tea, so we bought some of that good Swiss Miss hot chocolate for you. Do you want some marshmallows in it?” Both Dale and I chose to decline the offer and drink our hot chocolate straight! While we were waiting for the drink, Clyde pointed out cookies neatly arranged on a plate with little plastic cartons of pudding nearby. “I know you don’t eat or drink a lot of things that other people do,” Clyde said, “but I hope you can eat some cookies and choose the kind of pudding you like.”

Guess what? I was enjoying their thoughtful kindness and preparation more even than what they offered us. Soon the steaming cups were set in front of us, and we settled down with the pudding (Dale chose tapioca since he hadn’t had that flavor for a long time, while I indulged in the chocolate) and picked out some really good-looking cookies. As we discussed various items, I had a chance to talk with Nan about a typical English tea. Since she grew up in Scotland, she knew all about such things.

An hour later, Dale announced we had better be leaving since we had so many errands to take care of that day. Just as we were at the outside door, Clyde said, “Oh, wait a minute. I have something for you!” Nan was asked to go down to the basement to bring up something Clyde wanted us to have, something he had made himself. Soon Nan appeared with a jar full of a mixture of red, yellow, and green peppers and onions. Might be something else, too, but we couldn’t figure out what it might be. As Dale says, “Who cares? It just tastes good!”

Next stop? Price Chopper where we found some of our favorite people hard at work. At least they are off for a bit of a break when we see them. A number of years ago, I asked the boss if he minded that the workers stopped to chat with us. He answered, “That’s what they should do. It’s always good when employees take the time to talk to customers. That’s what makes for a happy store!” I hope he is of the same opinion still, because we are!

As I was trying to find an item I wanted to buy, I heard two of our friends, Jennifer and Cheryl, coming up behind me. “Oh, you tried to ignore us, did you?” Jennifer asked jokingly. “Yes,” agreed Cheryl, “we saw you going right past the office, and you didn’t even stop to say hello!” Of course, this was all in fun, as those two would never be impolite to anyone. Poor Cheryl had been driving down the highway the night before Thanksgiving when she was bumped from behind by a driver who never even put on his brakes. A stiff neck and sore limbs resulted, but, fortunately she was not injured severely. Her little granddaughter, in the car with her, was not hurt. However, the little one’s sister was hurt, but only her feelings! The reason? She was at home when the accident happened. She wished that she had been in the car too so she could tell about the accident SHE would have been in!

At the end of our conversation, Jennifer said, “Oh, I see some ladies at the end of the aisle that I’m going to talk to and give a hug!” Off she went, while we continued to speak with Cheryl. Later, when the two ladies were by themselves, I stopped to tell them what Jennifer had said about them, how dear they were. “Well,” said one, “she is really precious, always takes time to talk and hug!” My thought right then? Offer her a hug! But before I could do that, she gave me one! I explained, then, that I had wanted to hug her, but I was afraid she might think I was crazy! Her reply? “Oh, no. It’s good for one’s health, and I’m going to hug your husband, too!” Then the other lady came forward announcing, “Well I want a hug, too!”

Just before we left the store, after talking to Will, Scott, and Robbie (and enjoying their hugs), Cheryl came by with a card she was going to send to Sheila, a very favorite clerk who has been off work for about two weeks because of hip replacement. “She’ll get a real surprise to find that you two have signed up!” (still more tomorrow) – CHRIS