From My Childhood – Dumplings 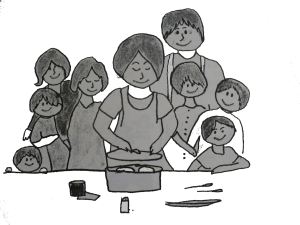 We’re all ready for dumplings!

February 19 – In the late summer when the shiny red-black dewberries beckoned willing (and sometimes unwilling) hands to pick bucketsful of them, Ma made her specialty, blackberry dumplings. She would set the dewberries or blackberries to boil with sugar and water, while the dumplings were mixed from eggs, flour, baking powder, a bit of salt and sugar and milk. Into the boiling berries they were dropped with a spoon, the cover was placed tightly on the kettle, we washed our hands… and waited expectantly.

When Ma took off the lid, we could see the fluffy, white dumplings floating in the ocean of bright wine-red berry mixture. Topped with canned milk and steaming with goodness, they made a lovely meal. Breaking apart the dumplings with our forks helped to cool them down a bit so they could be eaten a bit earlier than if we had left them whole. I, for one, had a burned tongue many times because I just couldn’t wait for them to cool completely.

Mixing up the dumplings

There were other dumplings too; the smaller, more-golden-with-egg ones that were put in soups. My favorite, though, was potato dumplings. Oh, those lovely tasty German dumplings with a nutmeg sauce and butter dribbled over them! Ma would grate up pounds of peeled raw potatoes, mix them with flour and other ingredients, and mold them into a rough potato shape, then drop them into boiling salted water. There they would bubble and cook until they were just nicely dry on the inside, fluffy and good. Out they would come to be laid on a platter side by side, only to be spooned off and onto our plates to disappear in record time, along with a huge bowl of the buttery nutmeg white sauce. – CHRIS

NOTE: these pictures were drawn by our daughter years ago to illustrate the stories