November 3 – Every month we are blessed to have a small group of kids come to help with the job of Harvesters. They really enjoy it, knowing that they are making others happy. I always chuckle at the vim and vigor of those kids!

This time they played a game they called, “Take a ride,” in which one of the bigger boys offered to give a ride on his back, jumping and running until the rider either fell off or jumped off. I could hardly imagine how strong those kids were. Finally the “transporter” fell and notified the group that riding time was no more.

In the same area, Carl was working hard to make sure that everybody received the foods on the list. Carl is a very happy man and since he just recently retired, he has been working with the group to do a good job of passing out the watermelons. His smile wins the heart of each who passes by him. 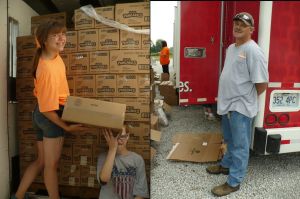 Cody lets the volunteers know just how many of this or that, but sometimes, when there are more folks waiting in line than usual, and the trucks and cars keep right on coming, the number to give out becomes less as the day goes on.

And something comical happened as well. A couple, working with Harvesters, was far across the driveway from each other. The wife was next to me handing out hamburger buns, while her husband worked with a couple men in the potato area. After I found that out, I quickly ran to give out the chips two cars away, so I could run to tell the husband that his wife would like a little word with him. Then I told her that her husband would like to get a hug from her. Well, it never hurts to get an extra hug now and again!

I still chuckle about one conversation I had with a young guy as he and his friend waited for the line ahead to move on so he could get the foods he could use. As I moved to his truck to give him the food, he looked straight at me and asked, “Are you still ONN-EREE’ like you’ve been for so long?”

Well, I had this kind of conversation for years, ever since Dale and I moved here from Pennsylvania. Since this young guy had a smile on his face when he asked the question, I thought it wouldn’t hurt if I joked with him. I said, “You can’t even spell that word because there isn’t one like that in the dictionary, but I can tell you are a joker and I appreciate your humor. Keep it up!”

I’ve always enjoyed humor, but it has to be good, not mean. That takes me back about 50 years to when I was teaching at Lake Erie Jr. Academy. As we were discussing various ideas of how to get along well with your fellow students, I looked at the back of the class where a fourth grader was crying.

I have yet to find a volunteer who is so proud of his work that he has to tell other folks how he has worked for Harvesters almost forever. No matter what they may be doing to help, they doesn’t want any credit for sharing the day together with the other folks. I think especially of Pam and Dennis Schoonover who have led out in this program just about forever. They make all of the reports to send on to Harvesters, and meet with some of the staff members from time to time.

Another very special worker is Mike who comes early, looks around to make sure that everything turns out right, and once the cars come rolling along in the line he moves around to be sure that all is going well. Pastor Alan stands at the head of the line to talk a bit with the drivers, while Tanja keeps the cars moving from one spot in line until the last of the folks have been through and are on their way home.

Finally, it’s time to clean up the area, and once more Harvesters will have done a good job, and will be back in another month to do it all over again. It is a real joy to work with the folks involved, and the parting words are, “Good job, and we’ll see you next month.” – CHRIS

Like Loading...
This entry was posted in Friends & Neighbors, Harvesters, Uncategorized and tagged Harvesters. Bookmark the permalink.