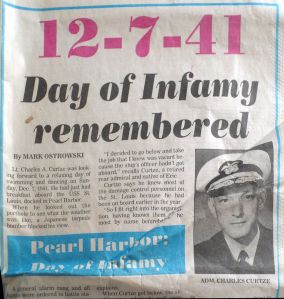 December 7 – Here we are again, with another day to remind me of those very sad days back in December of 1941, when we were asked to “Remember Pearl Harbor,” and what happened there. How could we ever forget? I hope you readers don’t mind, but I have chosen to make this a recurring post each year. It was a major milestone in the lives of all of us growing up in America back in the 40s.

How wonderful it would be if each of us, as we remember those who died on that sad day, would choose to live a life in which everyone around us is special, and we don’t need to fight to prove it. If all in our government, in business, in broadcasting, and in relationships with each other could work together without trying to put someone else down, what a change would there be in our lives.

Here is a copy of the blog, then, just as I originally wrote it:

Once again I remember that horrific day on December 7, 1941. It was a day when I felt the whole world was changing and that I as just a young teenager did not have any idea how to stop the bad feelings that would lead any nation to take advantage of others who were trying to keep the world on an even keel. Believe it or not, I can remember the news that came across to us via our old Philco radio. 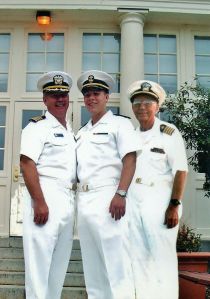 At first, nothing mattered but the fact that big brother Ed was in the Navy, having joined up as soon as he was able to do so. Since his ship was in Iceland at the time, they were soon leaving the area to move on to the Pacific to help to protect our troops following the attack on Pearl Harbor. He served aboard an aircraft carrier for two years. Of course, I was proud to tell the kids in school that my brother was on that ship!

I will never forget the attack, the Day of Infamy. So many of our ships there in the harbor were destroyed, and many of our brothers and friends lost their lives in that bombing. There were 2403 dead, 188 planes destroyed, and eight damaged battleships. 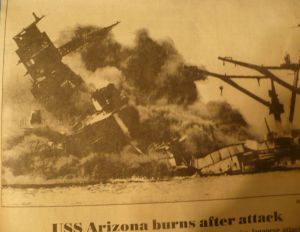 Many memories come to me as I think way back to those days of war. First of all, I can remember where I was when I heard the news on our tall Philco radio that Hitler had invaded Poland on September1, 1939. My folks were relaxing in their hammocks down by the grape arbor near the creek. I had run up the hill to get something they wanted, and while I was getting it ready, I turned on the radio. That’s why I had heard the bad news. As I remember, I ran down the hill faster than I had climbed it. What a shock that news was to my parents!

By the next year I had graduated from high school. A number of classmates were graduated in absentia since they had already enlisted that year. Before that, in our Problems of Democracy class as well as in History of Europe we students would debate as to what our country should do; what our action should be as far as joining with England and France as those nations fought off Hitler and his Axis friends. FDR was hoping that he could convince the powers that be to jump into the conflict, but he was not successful. 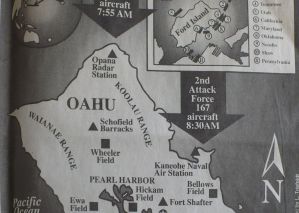 Actually, with what happened at Pearl Harbor, when the Japanese, Germany, and Italy jumped into the war in a big way, the president did not have to make the choice; Japan did it for us! Five days after Pearl Harbor, we joined the Allies in their fight against the Axis powers.

Times hadn’t changed much though this side of the Atlantic, because nobody was much interested in going to war. However, as I mentioned earlier, it was that Pearl Harbor day that brought us into the war.

And what happened to FDR? He died in April of 1945 after a long career and having been elected president three times! But even more unusual than that, I remember him for his words, describing that memorable day, “This Day Shall Live in Infamy.” He surely was correct. Who could ever forget the terrible loss of life on that day so long ago?

As I remembered another anniversary of Pearl Harbor, it came to me that we still need to do our best to keep our precious land free of hatred and “do-it-my way” ideas, giving thanks that we are Americans, and through you, giving people around the world a light to follow. – CHRIS