July 15 – Since I had lots of work to do in the garden last Sunday, I was up early, had breakfast, and was just waiting to go out to start, the phone rang. Guess who? David said he would drive the 50 miles from his home in Kansas to do what he could to help his old (er) parents get the garden all cleaned up.

When I tried to talk him out of the job, he very plainly announced that he would be here within the hour! “Mom, did you ever do anything to help Gramma Christoph when she needed you?” Well, sure we did, and I’m sure David remembers those many times we drove the few miles from our house to hers back in Pennsylvania, since both he and Biz, his sister, knew that when Dale and I went down to help Gramma, they would be right there with us. So, what could I say?

Since Dale hasn’t been able to keep up with the hoeing and weeding of our garden due to his recent back issues, lots of weeds had grown since I last hoed and raked the onions, calico beans, cucumbers, tomatoes, and squash. So, I never said another word except that I was thankful I had a caring son!

While we were waiting for him to arrive, I donned my long ragged black jeans, and a beat-up light jacket to keep the ravenous chiggers from enjoying a meal from my legs and arms. On went my big hat to keep my head protected from the bright sun, and I was ready to go. The task at hand? Our big patch of bamboo had been growing outside its planned boundary, some of it right in the lawn, and I wanted it to look as if somebody could keep it looking neat.

Some of the stalks, of course, were much higher than my head, but fortunately I could bend down and cut them off with no trouble except that I often was so mixed up with those canes that I had to be sure I followed my plan of keeping a straight line. As I walked around the corner from the first bamboo, I continued to find lots more that needed to be cut. In some places the canes were light tan and all the leaves were gone. If you have never cut bamboo, you don’t know that the canes can give you some pretty bad scratches, on your hands and arms, even if you do wear a jacket for protection.

Finally, I came to the end of the work on one side of the path, but there were so many bamboo stalks across the path and into the field, that I had lots more to do on that job! When we can finally get rid of the burning pile, I will be more than glad. It is so full of all kinds of stalks like yucca, tree branches, and now bamboo, that it should burn up quickly. Of course, I will NOT be the one to take care of that fire. Plenty of strong relatives in the neighborhood, and I know they can do a great job. 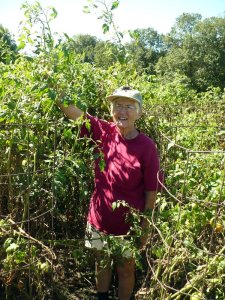 I had almost finished the bamboo job when Dale called out, “David’s here! David’s ready to work!” After David called out, “Hi, Mom!” he started working like a Trojan, moving quickly from one tall caged tomato plant to another. Where do “kids” get their energy? First time this year that the branches were all tucked into the cages. I’m always afraid that if I try to do that job, most of the branches will break somewhere along the line. But Dale and David? They just weave those branches in and out of the cages, and soon there are none lying on the ground.

OK, now for the hoeing. Taking a hoe from the shed, he started off with a bang, asking Dale if he should hoe a whole line of tomatoes on one side and then come back up the row to finish the job before moving on to other plants? Dale says that he should hoe all around each plant before moving on to the next. Sometimes I just stood by watching, wondering why I couldn’t work that fast! (Well, I know why, but I hate to admit it!) Before long, all five rows of nine plants each had been cleaned up, with very few weeds to be found anywhere near the plants.

Then it was time for me to pick the tomatoes. Usually I wait until they are rich and red and ripe, but as I moved down the row with a plastic ice cream bucket, I found that there were many (TOO many) half eaten ones lying on the ground or half eaten on the plants. I decided right then that I would pick ones that weren’t quite ripe. I could keep them in the house until they were. No point in Dale’s planting the seeds, having the plants grow strong and sturdy under the grow light in the basement, and finally in the tomato patch, only to be stolen from the tomato plant!

[ One slice per sandwich ]

I hated to pick unripe ones, but I knew I had to do something to save the others from the box turtles or the possums. The big ones were huge and the plastic buckets of the small Pearlie Pink were soon filled. Other kinds this year are Jersey Devil, Delicious, Mortgage Lifter, and the small Sun Gold. I always chuckle when I think of that Mortgage Lifter or the Jersey Devil! Out on the counter in the kitchen, those unripe tomatoes have now ripened nicely, with some of them so large that ONE slice is enough for a sandwich. Lately both Dale and I have had two of those tasty tomato sandwich treats for supper, and have enjoyed every bite. – CHRIS