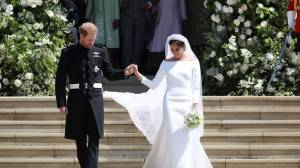 May 21 – The world stage has been growing with all of the plans for the wedding that took place this weekend, with another young lady welcomed into the British royalty! Need not ask what is first to be talked about around the world in most, if not all, countries! Some young ladies wish they could be the one who will become the wife of Prince Harry, giving her the right to become a very special lady all through the British Commonwealth. I have been following this fairy story ever since Markle and Harry first became friends. Know why? Because Harry has always been a favorite with me. The age difference has nothing to do with it since I am over 60 years older than he is. I just think he is a friendly guy who would be happy to help out even a commoner when he can.

Actually, I had better slip in a few words about Prince William, too, as I have always enjoyed reading about him and his family. Besides, we share our birthday, on June 21, as well. He has such neat little ones and a beautiful wife Kate.

Just a few weeks ago, Terri, the wife of one of my much-esteemed nephews who live in California, took a trip with her niece to England. One day when they were walking around Kensington Palace, they were in the right place at the right time! Since the whole country and a good bit of the world were interested in anything at all about the new baby. Terri thought it would be good to check around the area to see if there was a birth notice. As they began searching they found that everything was blocked off from view all the time so they wandered around the side where the various embassies are located.

They were on a beautiful street by themselves when a lady with daffodils came running toward them, yelling at her little one on a stand-up scooter. “Hurry! They’re coming!” Terri saw a police motorcycle follower by two Range Rovers and then two more motorcycles, and there was Prince William driving Kate and the new baby home. Right past those two Americans who were the only ones on the sidewalk! They were almost seen in the BBC helicopter news shot as the Range Rover turned down the embassy lane. Totally excited!

They both saw William but did not see Kate in the back seat because of dark windows. They were so shocked and wanted to confirm what they thought they had seen. So they asked the security guard, “Who just drove by?” He smiled and said he could not say, but they were very important. Niece Jen asked if it was someone who just had a baby, and he said “Yes.” It was indeed Kate and the baby. They raced over to St. Mary’s where all the national news was still set up. THEY WERE INTERVIEWED!! (I really appreciate the fact that Terri and Jen agreed to let me use their London experience as a starting place for this story!)

As I read the note that Terri had written to her husband Rich, I was reminded of my thoughts on Queen Elizabeth so many years ago. She was just 25 years old! I know very well that I would not function at all in those circumstances! So how did she become the queen? Prince Edward who inherited the throne from King George V when Elizabeth was just 10, abdicated to marry Wallis Simpson, and George VI became king. Unfortunately he became ill and died at age 56, so Elizabeth became queen.

She was not even home at the time but had set out with her husband Prince Philip on a tour of Australia, New Zealand, and Kenya. While at the TreeTop resort in Kenya, a beautiful place among the trees where one could see the countryside, Elizabeth enjoyed watching the elephants and other wild life. Soon she was too excited to sleep and most of the night was spent in enjoying the animals. In the morning at breakfast she tossed bananas to the animals below. They did not hear of the death of her father, King George, until afternoon when a reporter broke the news.

Well-known hunter Jim Corbett, her bodyguard at the time, wrote the now famous lines in the visitors’ log book: ”For the first time in the history of the world, a young girl climbed into a tree one day a Princess and after having what she described as her most thrilling experience she climbed down from the tree next day a Queen — God bless her.”

So Elizabeth was now queen. She and Prince Philip headed back to London and moved into Buckingham Palace. Her coronation was in June of 1953. I am sure that she has always been an example of ability and love for her country and its people. – CHRIS

Like Loading...
This entry was posted in Africa, History, Not Working, Other and tagged Africa. Bookmark the permalink.

1 Response to Royals Weddings and Babies