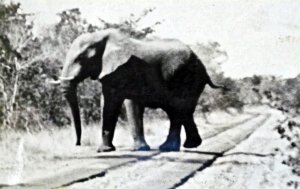 [ Elephant on the march ]

April 21 – Another interesting place in Southern Rhodesia was the Zambesi ruins, an area long ago inhabited by an unknown race who built huge walls of stone that tourists go to see and marvel at. A large carved stone bird was dug up there, and many small copies of it have been made in wood or stone. It is known as the Zimbabwe bird.

Another place in Zimbabwe is the Wankie Game Reserve, a large area where wildlife is protected and all sorts of animals can be seen by tourists driving around on roads. There are elephants and lions and Cape buffalo and sable antelope and hippos, to mention some of the larger animals. It is possible to get very close to lions but the windows need to be kept shut and pictures taken through the glass.

I remember camping with my parents in a camping area and there was a semi-tame young (wildebeest (gn) that roamed around getting treats from campers. I took it a couple of carrots, which it enjoyed and then began to butt with its head to request more. I grabbed the horns and held the head down to the ground for a while, and then released it.

I then had to run for safety as that gnu was right after me! We circled the car a couple of times and fortunately my mom opened a door and I leapt in for safety. The next morning on “rest-room” trip, gnu was standing around looking for a victim and I had to be escorted by Mom and Chris.

I am a nature lover, and enjoyed encounters with various venomous snakes – cobras, mambas, and puff adders. Twice spitting cobras spat their venom at me but it landed on my arm and no harm resulted. The venom is squirted out through gaps in the front of the fangs. One of the young missionaries went into a dark shed once and a cobra spat venom into his face and eyes and he had to wear dark glasses for a long time.

The same man was out hunting at night once and so were an African friend and I. We all carried flashlights (torches over there). Our prey was spring hares, a rodent that hopped like a kangaroo and lived in burrows, and ate a lot of the mission crops by night. When we saw the light of the mission fellow, both of us turned our lights toward him and he paused briefly to look at us, and then took off running in the opposite direction.

We were fortunate that he did. Next day when we asked him why he had run away, he explained that he thought our two lights were the eyes of a big leopard and he didn’t want to take the risk of wounding it and being attacked!

Back to snakes. One night an old villager knocked on my folks’ door and asked if my dad would come and shoot a snake that was in his henhouse. So my dad got his gun and his torch and off they went to the old man’s house and over to the henhouse. Sure enough, there with its head tucked under a sitting hen, was a snake, swallowing the eggs. Dad took careful aim and fired, and the egg-thief was dead.

Four big lumps in its body showed where four eggs had gone, with shells still unbroken. The African picked up the snake and squeezed out all four eggs into a basket. For several weeks thereafter Mom did not buy any eggs from African vendors knocking at the door, fearing that she might buy eggs that we knew now as “the eggs twice eaten!”

When one bought eggs from Africans, the usual procedure was to place them in a bowl of water and see how they reacted. If they laid over or floated, it meant they were old and might have little chicks inside. The hens ran free and made their nests where they wished and when the African owner found a nest, he just collected all the eggs and took them off for sale. – DALE