February 5 – I often wish that I didn’t want or need to have everything that I do turn out perfectly! Things such as blogs! Since some of my thoughts and words are in that category, I take much longer than most people, trying to make sure that I won’t have to be ashamed to admit that I did write that particular blog!

Dale doesn’t have that problem. I think I spend at least twice the time he does with the same amount of words. His colorful words bring his stories to life and help the readers to enjoy what he is writing about. Not very long after he has begun to write, he asks the same question he always does when his blog is finished. “OK, I’m done. Are you going to help me out by getting the pics ready to send along with the blog? I would really appreciate that!”

Now for the first time in about four years since I first started blog writing, I made a big mistake, as I hit the wrong button when I was getting ready to send a note about Dale’s last prescription!

No, the blog didn’t go to our son David for publication. Instead it disappeared as if I had hit Delete. In the beginning I wasn’t even concerned, thinking that I could somehow bring the words back. However, I must have hit the wrong button again, rather than the one which could give me the help I needed! After searching here and there and just about everywhere, I knew I had no idea in the world how to remedy the situation.

About a week later, after trying everything I could think of, I wrote to David asking if he had any idea of what I needed to do. His reply? Three points that I had already tried, with no success. That blog was gone for good and would never be seen in Pakistan or Great Britain, or France, or anywhere else on someone’s computer!

But I was worried for another reason. In the first writing of the blog (the one I lost), I had written about Dale’s prescription for methotrexate which he takes for his Rheumatoid Arthritis. When he went to the pharmacy, he was given the prescription, supposedly the correct one, but found that there were only FOUR pills, rather than 24 which had been prescribed for several years already. The lady said that some mistake had been made, and if we waited a bit, she would use the four she had and add another 20 to bring the total to 24 as prescribed.

After waiting awhile, we made our way to the checkout with two envelopes, one for the methotrexate and the other for Dale’s second prescription. We were so late in getting back from the dentist that none of our friendly workers was there. A tall young man and a shorter one with a big smile took care of us. Finally, we were out the door and going home.

Since it was such a long time we had been away, we decided to eat our breakfast, dinner, and supper all at once before unpacking our groceries. Down the stairs to the basement and the food shelves went the juices and cans of vegetables. Into the cupboards in the kitchen went the vegetable oil and cornstarch. Into the refrigerator went the cottage cheese and yogurt.

[ Were they in the basement? ]

But where were the small white bags that held the prescriptions? No worry. We would just go back to the basement and check the plastic bags to see if maybe the methotrexate and Gabapentin had not yet been taken from the bag. No, the prescriptions were not in sight. Out, then, to the garage to see if they might have been left in the truck. No again!

Ever since we noticed that the prescriptions were not on the counter, I had been praying, silently, that we would find them. I even checked the glove compartment to see if, by any chance, they had found their way to that space. No, for a third time! By this time, I noticed that Dale was coming up the stairs from the basement. “What are you looking for?” I asked. “I can’t find the prescriptions,” he said. “I’m going out to check in the garage, in the front seat, and everywhere. They have to be somewhere, as we haven’t even put them away yet!” “Well, don’t forget to pray,” I said. “God knows where they are!”

After checking all through the house, even in Dale’s pill case atop his dresser, we finally gave up and he was ready to phone the pharmacy. But it was so late in the afternoon by then, that he had to wait till morning. 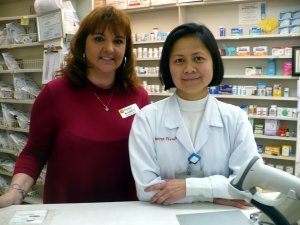 [ Karen and Kim from the Pharmacy ]

Early the next morning, he made the call, only to find that nobody had turned in the prescriptions. Now what to do? What else was there to do except keep praying? God truly is all-powerful, omniscient, kind, and loving, and He always does what is best for us. We know that from past experience when two weeks later Karen from the pharmacy told us someone had found Dale’s prescription there in the store and had turned it in to her.

Due to our prayers, we were not especially surprised, just grateful. She was so pleased and happy that all turned out well. As we said goodbye to her, I wondered if she might be wiping tears from her eyes. I just held her hands across the counter, gave her a big smile, and thanked her for being such a good employee and friend!

Once again my faith was strengthened, faith in a God Who loves us so much! Often He gives an answer right away, but sometimes, as we learned, He takes longer as He strengthens our faith. – CHRIS