June 4 – While we were in the post office the other day, Richard, our very friendly ex-postmaster, told us of his his fishing plans, depending on the weather. He and a group of friends would be driving down to Truman Lake, named in honor of a former president from Missouri, to fish for paddle-fish. The reason? The Lake of the Ozarks is a bit overcrowded for his liking. That is a lake where folks have houses built “on the water”, and there is a house every few feet! Truman Lake is operated by the Corps of Engineers, with no houses allowed.

Said Richard, “It will be difficult for me to quantify tales of my fishing experiences. I have been fishing with my family and friends for over 30 years. Fishing and “lake-ing” was all my wife’s idea, as it started. We tend to be on the water two to three times a month during decent weather. I must disclaim that I do have any real fishing skills. Maybe 3 out of 10 trips to the water will you see me catch a fish. While landing a “gorilla” (as I call the bigger fish) has its rewards, I simply enjoy the serenity of the water, the beauty of the land, and being in good company. Oh, and I like seeing the eagles at the lake!”

How much those guys enjoy each other while they drag in the fish. I can just imagine the stories they tell of “the one that got away,” or “that was the biggest and heaviest fish I ever caught,” or “it sure is good to leave town behind and just enjoy being outside with friends!”

[ Unhooking a catfish from our pond ]

I know very little about fishing or just plain fish, for that matter! I don’t know the difference between a blue gill and a crappie, but I do know what a catfish looks like, and I feel sorry that it’s so ugly! There are lots and lots of those “cats” in our pond. Once our friend Clyde and his grandson stopped over from their home to do some fishing in the pond. Such a beautiful day it was, and they caught a number of fish while enjoying the sunshine and the breeze. Clyde told us the story of cleaning that fish, an experience that changed his mind about coming back to the pond ever afterward! Just too hard to clean up. 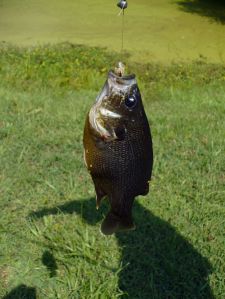 Speaking of fish, here’s a note about something that I haven’t thought about in about 80 years, back when I was ten. In those days we had no car so had to walk everywhere we went. If we followed the railroad track that was about two blocks from our house, we could switch off to a road that led to a fishing area where many folks from Erie, PA came to enjoy the sport. My mom was a great fisherman and could throw out the line like a professional. Just a little nibble would alert her to another catch.

One day as I sat beside her on the dock, a big wave came along and took with it the dozen or so fish that were on a stringer in the water waiting for Mom to finish her fishing. All the time she had spent on catching some pretty good size fish was wasted, and she was so disgusted that she said, “C’mon, kids! No use wasting the rest of the day if the waves are going to be that bad.” So we gathered up the poles and all of the other things that we had carried down the road about four miles earlier in the day, and headed for home. No more fishing THAT day!

Richard said that the reason for his trip would be to fish for crappie, as the paddle-fish season was almost at its end. “I will be spending next week with four or so buddies. We had worked together during my time at the Lee’s Summit Post Office. THEY are the real experts. This group is in their third decade together. I am lucky that for the last few seasons I have been able to hang out with them. At the risk of jinxing myself, I hope to bring home 10 to 15 full baggies next week!”

I wonder if his plans worked out well, and if there are 15 new baggies in his freezer! He is a very hard worker and always has been, but he likes to have good fun, too. – CHRIS