January 22 – Weather today is mild and damp with a temperature of around 45-50 degrees. The slippery ice we had has now melted and the roads are safe again, as the weatherman gave us some temps in the low 60’s late last week.

For days we kept hearing a great deal about the “coming ice storm.” The city snow plows were out preparing the highways, and always, it seemed, the worst was still to come but would probably not be as severe as forecast. Happily that was the case. We did have ice and freezing rain one day early in the week, but no power outages at least. 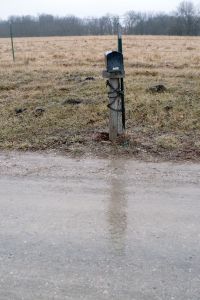 As a result of the ice, we refrained from visiting the mailbox, do didn’t go out until the Martin Luther King holiday to pick up the mail from two before. Didn’t want to risk a fall by walking out onto the road to reach the mailbox. I have a large scar over my right eye as a result of a fall on an icy step years ago. Some sand sprinkled on the ice would make a safe passage but the sand is in a large sealed tube and too much bother to open and pour into a bucket. Usually I just carry a filled tube in the vehicle as ballast. I still remember some exciting icy moments on the highways as I drove to or from work back before retirement in Erie, PA!

Our church was closed by a One-Call to all our church members saying that slippery roads made it advisable to cancel church and stay safe at home. When the phone call came I was up and partly dressed. If we hadn’t already made the bed, we would have climbed back in for another period of shut-eye. So we just dressed appropriately and had breakfast. It was supposed to be our monthly potluck-dinner-after-church day and it had already been agreed on the day before that potluck would be deferred until the following week and church would be held if weather permitted.

We were visited recently by a Jehovah’s Witness couple who came to share the Word of God with us. Chris invited them in and we had a pleasant little visit, with Bible readings and talk about Jehovah and His names. 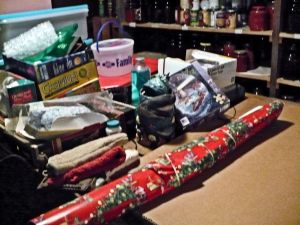 Speaking of Chris, she has been working downstairs a lot lately, cleaning up some of the mess made when a water pipe burst some weeks ago and poured a lot of water into the rooms down there. Everything is dry now, but a lot of boxes were soaked, paperwork damaged, ceiling tiles collapsed, etc. I ordered a bundle of new tiles and should have them in a couple of weeks. These tiles are not fun to install!

As usual the birds are out there at the feeder, having breakfast or lunch. There are even a couple of goldfinches, in drab winter dress, and several mourning doves which we understand would probably have flown south for the winter if it were not for the hospitality of bird lovers. We are enjoying a bird calendar that our son and his wife, David and Darlene, got us for Christmas, with a colorful page each day. Today it is a scarlet tanager, which we don’t see around here.

I wish that pileated woodpeckers were more common. Once I did hear one back in our woods but didn’t get to see it, just a rather large hole in a tree-trunk that it had made. We have a number of cakes of white suet that I bought at sale months ago, and I keep bringing them out one by one as the woodpeckers empty the wire cage that holds them. They sure do love that suet and often are at the new cake before I even get back to the house.

Every day I spend some time working on a 1,000-piece jigsaw puzzle laid out on our kitchen table. I have spent weeks at that thing, and have weeks more to go. It is annoying that certain pieces fit in more than one place, and obviously I have more than one in the wrong place. I may never get this corrected until the puzzle is about complete. After an hour or so my eyes start to hurt and I have to quit and go rest them for a while.

OK, closing time for this blog, so it is good-bye and have a great week, everybody. – DALE