Fall and Pears and Fallen Pears

[ Pears attracting the butterflies and yellowjackets ]

November 30 – We have finally said good bye to our dear friends, those pretty-but-dangerous yellow jackets! As we walk past the old pear tree that has dropped a number of bushels of fruit this year, we see all of the pears that I tossed out from the tree to the pasture. Lots of small ones, and those with bumps and bruises as well. Every time I walked past the tree, I threw out that kind so that I wouldn’t have to check out another one.

In the beginning, I was afraid to even go near one that had yellow jackets, small flies, or bees enjoying the rotten pears. After I had built up my nerve, I still didn’t throw any out into the pasture, but rather stood back, took good aim, and kicked the pear with all of its eaters as far into the pasture as I could. Sometimes I took a little more time, deciding just where that pear would land if I kicked it straight and hard enough! Every once in awhile when I do things like that, I am reminded of my five brothers, who took time to show me how to kick, and bat, and catch, but they used a baseball or football, rather than a partially eaten old pear!

Right now we have the better pears that I picked up off the ground, lying in trays out atop the old freezer in the garage. In fact, we gave a couple bags to one of our visitors today. She does NOT like pears at all, but her son thinks they are top notch in the world of fruit. 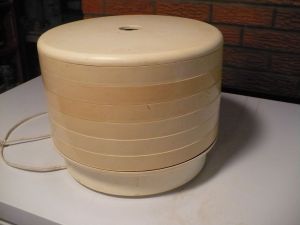 We have been using our dehydrator a lot lately. First, it was tray after tray of Asian pears, beautiful golden fruit that bore so heavily this year. We picked those we could reach from the ground as we moved around the tree; then Dale stood atop the ladder and tossed them down to me. Fortunately, he wasn’t planning to hit me on my head or neck—this time! And I knew enough from sad experience that I had better stay out of the area right near the tree, so I wouldn’t develop any sore spots. Finally, Dale got the “picker” he had made to pick the fruits he couldn’t even reach from the ladder, The long pole with a cup shaped bowl enabled him to pretty well clean out the tree.

Strange how we used to use that dehydrator last year and before, but this time we hadn’t planned on doing so until one of our friends came out to pick a couple big bagsful for his family. Seems as if that job has taken some of our time every day since. By the time the Asian pears were finished, the pasture tree was sending down its fruit, so we were kept busy enough; not only picking up the fruit, as I mentioned earlier, but also sharing with others. – CHRIS

Like Loading...
This entry was posted in Around the House, Yard work and tagged Food, Insects, Yard work. Bookmark the permalink.