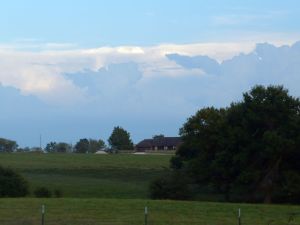 November 15 – Another nice, sunny, mild day and it is now coming to a close. Chris is starting to fix supper and has nothing for Dale to help with, as yet. Janice, Harvey’s mother, came over to give us haircuts, as she does about every six weeks. She has been our barber for many years. After haircuts we usually manage to persuade her to come and sit in our living room and chat a little more. Her cell phone rang loudly after a few minutes ago, and her husband needed her to come and get him somewhere out on one of their fields.

Chris had been asked to come over to the Kingsville public school where an appreciation meeting for the school teachers was to be held, along with a dinner provided by the school. Chris was not a teacher there, but she was a volunteer for many years and made friends with a great many children and was therefore invited to come over too. Not wanting to go to the dinner, Chris left in time to arrive after the meal. Upon arrival, she was greeted vociferously and hugged by many of the children she used to work with. She has been retired from volunteer work for several years now. 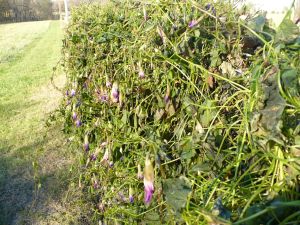 On Saturday morning we experienced a frost and everything around us was silver before the sun hit. Others had had their frost the day before, but we didn’t. The next day I checked on our long row of Heavenly Blue morning glories, growing on a fence in our front yard, and found that they were all killed and hanging lifeless on their vines. They had been so beautiful for weeks and weeks. A few days earlier we did have a mild frost but it only damaged some of the flowers and they were continuing to bloom, with a myriad more buds yet to open. 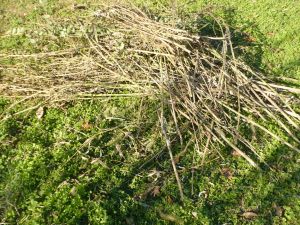 Chris was busy this weekend cutting our two beds of perennial Maximillian sunflowers that had completed their blooming and just tall stems remained. After they were cut, she moved on to our six peony bushes and our two mock orange bushes. I piled the cut sunflower stems on a blue tarp and dragged them away to the burning pile. My, they were heavy. I had to stop and rest a bit several times before reaching the burning pile.

Then I turned my attention to the morning glories. Was surprised at how thick some of the stems were and how difficult it was to pull the roots out of the ground. I only pulled up a few before it was time to retire for the day, and we planned to remove the rest this afternoon. I have a Grampa weed puller and will use that on the rest of the row. However, by the time we had had our haircuts and done some visiting, it was too late to work outside, so that will have to wait.

Last night we had and will have a super moon. The one I saw last night looked just like a regular full moon, silver and not particularly super. Tonight it was more orange for a while, and then I lost track of it and it doubtless turned silver too. Will have to wait a few years for it to return. 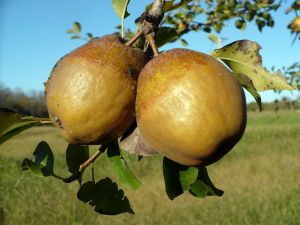 We have decided to run some more of our pears through the dehydrator. They are just plain old pears, off the ancient and half hollow tree in the pasture, and not of excellent flavor. However, we had a lot of them on trays in the garage and they might as well be used. If we don’t care for the taste when this first batch has dried, well, we will find something else to do with the remainder! Not many of our family and friends care for them.

This tree has borne heavily in years past, up to eleven or twelve bushels. We gave away a lot of them and canned a lot of them, and in fact still have some of those old canned jars on shelves in the basement. Chris took care of peeling the pears and let me slice them and put them on the dehydrator trays. Once all six trays were filled, I carried them downstairs and put them on the dehydrator and turned it on. After a day or two, I shall remove all those dried pieces and put them in plastic bags in the freezer. Next it will be Red Delicious apples that we have a lot of.

Nothing else exciting comes to mind right now, so I am going to sign off and take it easy for the rest of the evening. To all, a good night. – DALE

Like Loading...
This entry was posted in Friends & Neighbors, Yard work and tagged Yard work. Bookmark the permalink.