October 10 – It’s been a calm, mild, cloudy day and I haven’t really accomplished much so far. Yesterday was a nicer day and I started it out in the garden, digging up our row of yellow O’Henry sweet potatoes. We had just a dozen plants, but they had sent out a vast swarm of vines that had engulfed our sweet pepper plants and were now climbing in the opposite direction, over our row of tomato plants. Some of the vines were blooming, with purple flowers obviously of the morning glory family.

[ Sweet potatoes right out of the ground ]

Earlier in the season I had laid several pieces of wire netting over them, to keep rabbits from nibbling too much of the growth. Now the problem was to get all the netting and the vines and the big, tough grasses, up off the ground so I could start digging up the sweet potatoes. This took a lot of pulling and straining and tripping over the vines, but bit by bit success was achieved, and I started to bring up the sweet potatoes with the pitchfork. I had to hunt in some places for the actual parent plant, for the vines had rooted in many places, and there was also a great amount of large grass plants concealing the areas where the potatoes lurked.

Right away disappointment became evident, as many of the tubers I was digging up were half eaten away by voles. That had been a problem in years past too, for voles love sweet potatoes and dig well down into the ground to find them. Now and then a vole would be visible as it ran among the vines, looking for a hiding place. Chris was there with her camera, hoping to get a picture or two, but they were never still for a moment.

Suddenly a vole came running out, with two large babies holding fast to her as she dragged them along. This is not something one sees very often, and Chris was hoping to get a picture, but the trio sped along among the leaves and vines, and then disappeared. We never did find out where they had gone to, and just had to assume there was a burrow they had entered. The entrance must have been large to admit all three rodents at once. A few of the sweet potatoes were undamaged, and the half-eaten ones will be cut up and the good remaining portions will be cooked.

I had about three wheelbarrow loads of vines to dump on the compost heap, and was pleased to see how many yellow jackets that were already there (eating rotting pears and apples) getting buried by the vines as I threw them in. We have more than a five-gallon bucket full of sweet potatoes, and now I have to remind myself via the Internet how to process them so they will last well for a while.

Then we gathered some buckets and went over to our giant Asian pear tree that is just loaded with pears. We have been picking them for weeks, and they have been getting riper and riper and more golden and sweet. This time we picked about three buckets of them, and there are still a lot on the higher branches that I will need a ladder to get to. Using a four-claw picker on a long bamboo pole, I was able to bring down a lot, and will get the rest in a day or two. Right now we have some in our dehydrator, about ready to bring out after well over a day and a night of drying. After they come out of the dehydrator, we put them in plastic bags, and then into the freezer.

Chris also took time to pick more of the little Pearly Pink tomatoes that are still bearing, and gathering just a few of the regular tomatoes that were ripening. We can still have tomato sandwiches with our meals!

At around five o’clock yesterday evening, we were pleasantly surprised to have a grandson, Kevin Reynolds, and one of his cousins, Sara Pope, drive up to say goodbye as they started on their three or four hour journey back to college in Lincoln, Nebraska, where they are both studying nursing. We had a nice visit, and Kevin did a little work on the computer for Chris, helping with some problems she was having. They had come down all that way to see a big free display of fireworks that takes place annually by a lake not far from here, provided by a commercial fireworks display expert who later uses up his leftovers for anyone who wants to come and see them. The display is spectacular.

We had an interesting experience last Wednesday evening. Laurie (the sister of our son-in-law) lives across the road from us with her husband and two children, right next to her parents, and she phoned to say that the parents had discovered an owl caught in a barbed-wire fence next to their entry gate. She wondered if I would be willing to come and see if I could unhook the owl? She came over in her car and took Chris and me over to the gate near where the owl was caught.. 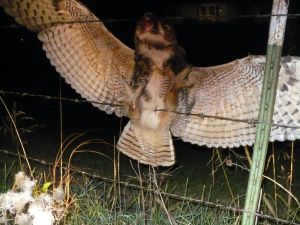 Once we got there, we could see the owl hanging from a strand of wire, with wings outspread. It was quite large, apparently a great horned owl. I came up behind the owl and seized it by the body with wings pressed in against it, to prevent it flapping and trying to seize me with its great talons. Chris managed to get several pictures of it, with one great golden eye glaring back at us, and the other eye appearing quite red and maybe injured by the barbed wire that it had flown into.

Laurie’s husband held a flashlight while her dad worked at unhooking the owl, which was caught by the skin above its beak. But there was just no untangling, and finally Laurie’s dad had to take a knife and cut through the skin, and finally release the owl. I carried it back to the cars and eventually popped it into a small dog-carrying cage.

Laurie phoned around and eventually they took the owl home. The next day they left it with a veterinarian, and a specialist in injured birds came and got it. The specialist may come back and release it in its home territory, once it has healed up a bit.