Cat and Snake (oh, and some cherries)

June 23 – Chris and I were sitting on the front porch reading the other day, and I noticed that the cat seemed to be watching something among my collection of house plants. She would move cautiously, crouching low, and finally I decided to see just what was drawing her attention. To my surprise, there was a snake, a prairie kingsnake, maybe two and a half feet long. I picked it up, receiving a couple of harmless bites, and took it over to show Chris. She went off to get her camera, and soon was taking a lot of pictures of it, with me holding it in my lap and secured by a grip on its tail.

[ Cat checking out the snake \

The cat seemed keen to have a closer look at her discovery, and eventually came over and stood in front of the snake’s outstretched head. Suddenly it struck at her face and she leaped wildly into the air with all four feet off the floor and body vertical, hair standing out, and hissing loudly. It may have bitten her face, as I noticed she was licking her lips. So much for a friendly visit! Pictures taken, I released the snake and it crawled over to a nearby 4×4 running along the gravel bed surrounding the house, and it disappeared apparently into that piece of wood. That was puzzling, for there appeared to be no hole or entrance, yet the snake was gone. It never did reappear. 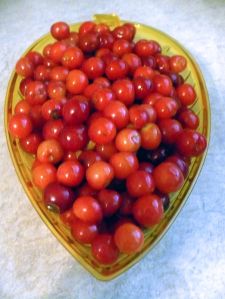 Later I went out and visited our three sour cherry trees from which we had picked the first of this season’s crop a couple of days earlier. There seemed to be a lot fewer cherries waiting to be picked than there were before, and some of the upper branches were broken, obviously by something fairly heavy climbing among them. I think that a raiding raccoon was to blame. The wildlife around here seems to be rather destructive at times. You may recall the damage a raccoon recently did to our garage door insulation and window blinds when it was accidentally locked in the garage overnight. The remaining cherries are now in a pail in the fridge, waiting to have the pits removed.

We are experiencing a lot of heat and humidity, and that humidity has taken a toll of my well-being, for I am very tired and unable to get any work done. Chris keeps working away while I sit around with my eyes closed. 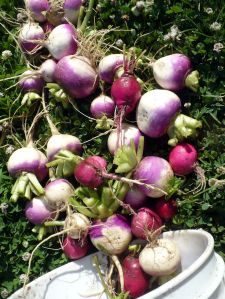 Yesterday she picked the rest of the big radishes and a lot of turnips and did some hoeing, and today weeded both rows of onions, while I just sat nearby in a chair and hoped to recover my energy.

Finally we both did go over to the blackberry patch and hoed out most of the weeds and grass that keep trying to take over. The job will have to be finalized later, as I was not about to bend over and pull out the plants that couldn’t be hoed without digging up the blackberries. Chris is a bender-over, while I am a kneeler! – DALE