June 9 – It’s been a nice evening, with fireflies flashing and promises of a hot day tomorrow. We were without phone and internet service for several days at the beginning of this week and are glad to be able to communicate again. So here is a joint post today from both Chris & Dale.

Some days you work indoors and some days outdoors. The other day we didn’t do a ton of work outside, but did get some boxes of books up into the attic and resettled in boxes with tops, etc. rather than in just any old thing. It took us about two hours. I stayed up in the attic, while Dale kept on filling a nice cloth carrying bag that I have never used. He filled it, then went up the stairs till I could reach it. While he filled the next one, I put away as many as I could. First, though, I had to get the boxes already up there all repacked and stored, so there would be room for me to move around. If I got a quarter for every time I bashed my head, some lightly, some hard, I would be partially rich! Anyway, we got all of those boxes of books up in the attic now,. and the top of the old freezer is clean once again. Sure do have lots and lots of SDA books with great stories.

[ Who wouldn’t enjoy handing out pancakes? ]

Hope to do a number of jobs outside tomorrow. I have a lot of tall grass along the creek south of us that I want to clean up. Won’t be as easy as in other years because the banks of the creek were eroded after the bridge went down the creek awhile back. – CHRIS

Went to volunteer at the Harvesters truck at the church on Wednesday morning. They were late because of some sort of gas leak at their start-out point, so we just sat around here at the house until we got another phone call to say the truck would soon be at the church. Then we were among the last volunteers to arrive since we are farther away than most, but we soon found items to hand out as the vehicles came by.

[ Wonder if this mustard was on the mustard potato salad? ]

Chris had bags of Clementines and I had boxes of mustard potato salad and macaroni and cheese. One of the other volunteers had chosen potatoes and they were in bags of 50-lbs, with ten smaller bags inside. She had to lug around a lot of those big bags for customers with several families, so doubtless had sore muscles that night! At the end she took home a lot of very ripe avocados, soft and sunken and not usable, to give to her chickens.

In the afternoon we weeded another row of tomato plants, which leaves just one row to go. My arms are rather colorful, thanks to bruising from the metal cages the plants are in. I have two band-aids and some big red patches on my left arm, and smaller patches on the right arm. 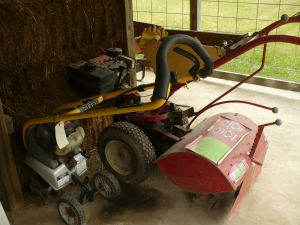 Our son-in-law Harvey stopped by to look at our rototiller and see if he could pull off the old belts. He did eventually, but couldn’t get them off the way the catalog said to do, so I’m glad he stopped. I’ll try to get new ones in town, and then somebody can use that tiller, maybe me. If not, our son Dave has offered to let me use his as he hasn’t had a garden in several years. I may yet take him up on the offer if we can find a way to get it out here. – DALE

Like Loading...
This entry was posted in Around the House, Yard & Garden and tagged Harvesters, Yard & Garden. Bookmark the permalink.