A Blizzard in the Garage

May 23 – This weekend I went out to the garage to let the cat out of the house for her morning exercises. To my astonishment, we seemed to have had a snowstorm overnight, but in the garage! In front of the garage door was a long and deep pile of shredded white foam insulation torn off the door. Whatever could have done that?

Across the room, the new white plastic blinds on our north window were COMPLETELY torn to pieces. Things were knocked off shelves all over the place. I went and called Chris to come and look. She was shocked – and went and grabbed her camera and started taking pictures in every direction. Cat was tiptoeing through the debris as she went out into the sunshine. Our question was – who did this? We have had opossums locked in the garage overnight more than once, and they usually knocked over a few things, but never anything like this; we suspected a raccoon. 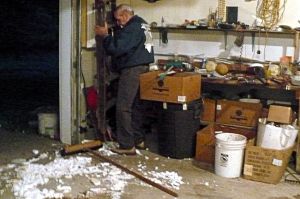 Since we were getting ready to leave for church, we couldn’t take much time to look around to find the culprit, but when I put out the morning bird seed I did probe with a rake handle to see if anything was hiding behind some of the heavy furniture against the wall. I had a brief glimpse of a raccoon as it hastened behind a protective device. I was wearing a dark suit and so couldn’t do any pursuing. When we drove away, we left the garage door up a foot or so and hoped that coon would leave. When we got home we figured the intruder had left, and apparently it had as there was no more disturbance. We were very grateful that there was no wind to speak of, for if there had been, that white foam would have been all over the neighborhood.

In the evening we got our old clothes on and went to work with brooms, sweeping up the debris and dropping it into our trash barrel. Had to back both vehicles out of the garage so we could sweep under them, and they took out some of the smaller pieces of foam with them, but we captured most of it and brought it back in. We picked up the boxes and containers knocked onto the floor and tidied up as much as possible.

[ Dale cleaning up the mess ]

We noticed that a lengthy section of rubber strip had been chewed from the bottom of the window that comes down to the station wagon tailgate, and wondered why ever THAT needed to be chewed! The chewed-off pieces were still lying at the scene. Now we have to figure out a new night-time closing routine to make sure we don’t have another destructive intruder. I guess we shall have to keep the cat outside when she asks out, and let her back in when we think it’s about time. This morning I dragged the big and full barrel out to the burning barrel and got the whole load into it without much of the foam flying away. Lit a match and was very glad to see the whole affair burning.

In other news, Sunday was scheduled to be the only dry day of the week, so we knew we had to get out to the garden and do some weeding. However the ground in places was still damp from the last rain, which made hoeing the weeds difficult. In some areas there were small white datura plants sprung up from last year’s seeds, and I want to transplant some of those and so couldn’t hoe very well around them. Don’t quite know just where to put them, as they can grow quite large. Had a big row of them last year and they really swamped and shaded a lot of cabbages. But they are beautiful and very fragrant at night, so were worth the setback.

In another area were thousands of volunteer cleome seedlings that needed to be hoed out, saving just a few of the largest for a row of them, but where WE wanted them to be. There were also a number of volunteer tomato plants that I saved to replace some from our original planting that had died. It seems that most volunteer tomato plants are mini-tomatoes, but these are better than none. 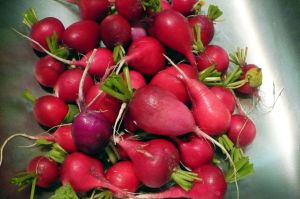 Our radish crop is good this year. We pulled a lot of them, all large and colorful, of the German giant Parat radish variety. Chris thinned the turnip row and weeded the onions. Then I dug up a row along one of our trellis fences in which to plant large colorful lima beans, and put in the seeds from a large container stored in our fridge. On the other side of this trellis are pea plants, but I noticed that rabbits had eaten off a lot of the pea plants, so the competition from the beans will not be serious. Lastly I dug up a row along another fence in which to plant cucumber seeds. I even added fertilizer but the seeds are still in their packets (four kinds) on the kitchen counter. Weather permitting, they will be planted soon.

After doing all she could in the garden, Chris asked me to start the riding mower so she could go over to our patch on the south side which had not been mowed for weeks and was beyond the reach of a push mower. So soon she was off and busy cutting long grass in the patch, and then on some of our adjacent trails. When that was all done, she did weeding around the front of the house, and tidied up the peonies on the front lawn that the rains had laid low. That lady sure is a worker.

After the busy day, we enjoyed some time out on the front porch, admiring the rising moon, and watching our first fireflies of the season. That’s all for this time! – DALE