February 29 – Imagine our surprise and pleasure as we were walking along the trails a couple weeks ago and found several tiny daffodil plants sticking out their noses to see if they would be warm enough to grow this early in February. As the days went by with more temps above normal, we checked the three areas that are usually full of bright yellow daffodils later in the spring.

It was a real joy to find little groups of green stems, with an occasional light yellow bud, all growing bit by bit, day by day. The largest plants are in one little corner of the front porch area. Then a few days ago, we found that the day lilies are poking their heads out of their winter beds.

There is a special group of daffodils, both yellow and white, that mean so much to us. In memory of our daughter Biz, my brother Pete sent a big box of bulbs from his home in Massachusetts. Dale wanted to keep them together so we would always know where they were, so planted them in a special place between the asparagus and artichoke beds. Every spring we go out to make sure the flowers, even from the time they pop up out of the ground, are clear of weeds, so we can enjoy the flowers even more. This year and others to follow will remind us not only of Biz, but of Pete, whom we lost in January. Both loved flowers so much, and their gardens were always full of treasures. 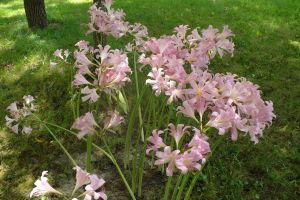 Just across the creek in one of the daffodil beds, we were more than surprised to find more spring plants showing up. They look somewhat like regular daffodils, but their leaves are quite flat. About ten years ago when we were on the garage sale path, we found some dry bulbs lying on an old box. “FOR SALE,” said the sign above them, so Dale asked what kind of plant they were. “Just daffodils,” the owner said. “Pretty good price too, because there are so many of them.”

Now as it turned out, Dale had just bought some bulbs that were not daffodils, but a lot more unusual and interesting. So what were they? Surprise lilies! Those small plants growing today will continue on till about June when their stems will shrivel and die. However, a couple months later, they will come up again, their stems will grow quickly, pink buds will appear, and before long beautiful pink lilies will surprise us with four or five lilies on one stem. Unfortunately, after a couple weeks, the new stems and lilies will also shrivel up and die, resting until next spring!

Once again, all of this reminds me of one of the following from one of my favorite poems, Pippa’s Song.

The year’s at the spring,
And day’s at the morn;
Morning’s at seven;
The hillside’s dew-pearled.
The lark ‘s on the wing;
The snail ‘s on the thorn;
God’s in His heaven—
All’s right with the world.

NOTE: the photos in this post are from spring 2015 – we aren’t quite THAT early yet!