February 22 – During walks when our children were small, son David would often rush ahead, carefully lifting each large stone near the water’s edge or protruding out into the water a bit, as he searched for crayfish. These “crabs” sometimes were as tiny as half my little finger, in which case they might find their way into our aquarium until they 3 nibble the tails from the fish. If they are the huge kind, longer than my middle finger, they were held carefully between thumb and forefinger, their feelers slowly moving around, until they are properly examined by both parents and then put back into the water. 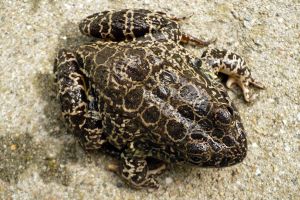 “Water skippers” were a never-failing source of interest and delight. Lying flat on our stomachs along the edge of the pond, we would watch the skippers dart and skim along the surface of the water, leaving tiny ripples behind them. Sometimes we skipped flat stones along the calm surface of the river or just sit quietly on the bank listening to the call of the birds and the gurgling of the water as it passes over the rocks. Once we found a huge mother toad just ready to lay eggs.

Hardly ever did we return from a walk without a number of treasures and keepsakes. In fact, we carried a special pillowcase with us so that we had room to carry the shelf fungus we found under the half-rotted logs in the damp woods. Or we might slip in some grayish feathers from out on the beach where the gulls squawk. We collected tiny little shells washed up by the waves or white smooth stones that catch our fancy.

Our kids also enjoyed hunting for fossil rocks that we found in a number of places around the Erie area. They would point out the imprints of shells and plants in the rocks, and notice their many varieties. Abandoned birds’ nests, and once in a while a wasp’s nest, might find their way into our collection of nature articles. Bright-orange efts, shiny black salamanders, turtles, toads and frogs, all in bottles or tin cans found along the riverbank, traveled home with us.

Striped Monarch butterfly caterpillars on milkweed stems would find their way to our home, held carefully in the hands of the David or his sister Biz. Furry black-and-orange caterpillars of the Isabella moth family would show up by the dozens in the fall. Sometimes we found cocoons and had the great joy of seeing butterflies emerge from them. On one of our walks when David was about four, we found a number of Monarch butterflies flitting about in a sunny field. How thrilled he was when one of them lighted on his shoulder!. Standing perfectly still, no doubt the hardest job he ever had, he didn’t move until it flew away. A little later the same butterfly came and sat on his head. Biz clapped her hands with joy, and David’s bright and awed expression showed his happiness. Three more times the same butterfly returned to sit on his hand or head. Who needs television when you have butterflies? – CHRIS

Like Loading...
This entry was posted in Animals, History and tagged Animals, Insects, Nature. Bookmark the permalink.