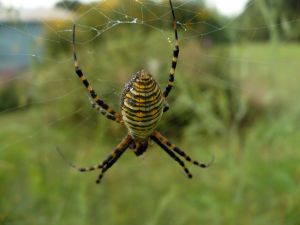 February 19 – “Mamma, I found a spider,” David announced as he rushed into the kitchen where I was baking.

“Does it have any babies?” I asked as I rubbed the flour off my hands. “Yes, it has a home far away, and it has grandmas and grandpas and Aunt Jeans (Dale’s sister, Jean, lived in Michigan at the time). It has a family.”

“Where did you find it ?” I asked. “Out in the field. Here, hold it,” commanded our four year-old, thrusting it into my hand. “It’s a pretty color.” 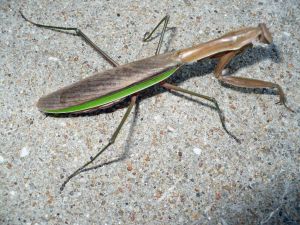 Yes, it was. Yellow spiders are pretty. At least to us they were. But the neighbor children didn’t think so! But then, neither did their parents, especially their moms. They didn’t think “any old bugs” were pretty, and they surely couldn’t see how a snake, even those with beautiful bright-green backs or shiny red bellies, could be anything but “ugly and awful.” So, surely their children couldn’t see how David or Biz could pick up the “horrid cold things” and bring them to me at any hour of the day so that I could admire them too.

Fortunately, our children had a walking nature dictionary and lover of all creatures for a father. And since I didn’t feel afraid of beetles, crabs, snakes, or other “ugly creatures,” the children early learned that these tiny insects and animals were both interesting and fun. Sometimes they had to learn the hard way that some small danger can be connected with God’s creatures if they do not handle them with care. After David was stung by a bee one day, and a huge bump appeared above his poor sore eye, he viewed bees with a little more caution. But as he sat at the breakfast table a week later enjoying the honey on his bread he remarked to me with all the seriousness capable of a three year-old, “Mamma, when bees don’t have stingers, I’m going to kiss them because I like them to give me honey.” 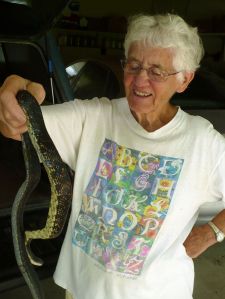 [ Chris and a black snake ]

Snakes seemed to be daughter Biz’s specialty. She was only about three when she and her daddy found several garter snakes in the garden. As he held them up for her to see, she quickly reached out for them. “Let me hold the snakes,” she pleaded. Daddy, who had reacted much the same way when he was a small boy, showed her how to hold the wiggling creatures by the tails as they squirmed about, and soon she was standing tall and straight with a snake in each hand calling, “Mamma, come see. See me!”

After that we had a great number of snakes of various colors, sizes, and kinds reposing in buckets, jars, terrariums, boxes, and any other available containers. Biz put moss in the bottom for their soft rug, a dish of water for them to drink, and then finally would feel sorry for their being in captivity and free them in the garden. Well she knew how valuable they are to the gardener! – CHRIS