Reprint from January 2015 – Two of the seven kids in our family were born in January, getting a good start on the new year. You may have read about my oldest brother Roy earlier in this blog. Now I’m going to tell you a bit about Rich who turned 91 [in January]. Ninety-one! I would say that might be old age creeping up if I didn’t know my brother.

One time I had a terrible earache (seems like I always had one.) I can still remember going to the doctor who gave me the only known treatment at that time, I guess–a syringe of very hot water that he shot into my ear while I sat on a chair with my head turned to one side and my face parallel to the floor. When Rich came home from school, probably second or third grade, he found me lying on the settee with my sore ear on an old cloth sugar bag (sugar didn’t come in paper bags then) that Mom had heated up in the oven. That warmth really helped with the pain, but not much with the healing! Anyway, he was just such a neat and kindly brother that he offered to open his reading book and read to me! Well that was very nice, except for the fact that I could hardly stand the “noise” that day. I appreciate the thought now, much more than I did then!

Another Rich story that stands out in my mind, and I still have the scar to prove the story, is the time we had all been paddling along in the creek and needed to dry off. Rich, Skeets, Pete and I all found places on those big wooden planks that made up the walkway along the rows of rose bushes Pop had planted for Mom. As we were enjoying the warmth, Pete got up and was swinging a little hatchet in his hand. As he came a little closer to me, Rich called out, “Hit her with it, Pete! Hit her with it!” I know he never in the world thought that Pete would comply with the orders, but he did, and Mom had another job of fixing up my many encounters with my brothers! She just wiped off the blood, cleaned up the cut, put egg white on it, and wrapped a piece of white cloth around it. Didn’t take long to heal, but I hate to think of how it might have been had he cut just a little lower.

As we grew up, there was a special bond between Rich and me, maybe because we both were a little quieter than we are now (well, he is anyway!) and had a lot of the same interests. He loved the garden and all the flowers Mom planted and took care of, selling some of them in beautiful bouquets to those who stopped to buy vegetables and fruits she set out on her stand in the morning. He helped to take care of the chickens,the ducks, and the goats we had, and was always ready to join up to cut the corn off the cob, corn that Mom put in the pressure canner for us to enjoy during the winter. I’m not sure that he enjoyed “shucking” the wild strawberries that Mom so faithfully picked each summer, but we all enjoyed the strawberry shortcake with those big baking power biscuits.

Nat in her nursing uniform

Not too long after he graduated from Academy High, Rich was drafted into the army. He was sent to Deshon General Hospital in Butler, PA, a hospital taken over by the Army before another dozen or so were built. He left behind back in Erie, his very sad sister, who had a hard time accepting the situation. Later on, it was off to England, where he worked in a hospital where wounded servicemen were taken care of. Natalie Fronzak, head nurse at the time, soon learned that she could trust Rich, knowing he would follow her orders. As the days went by, their friendship grew stronger, with each one finding the good points of the other. While Rich remained in the service, Natalie came back to be with her family in Buffalo NY and visited us in Erie. Right off the bat, I thought she was just tops, and when she started to call me “Little Sister,” she won my heart! I didn’t want to lose Rich, but if he loved Nat, well, that was OK with me!

Later on when Rich came back to the States, he and Nat were married, and plans for the future were made. Rich chose to enroll at Emmanuel Missionary College (now Andrews University), preparing to be a teacher. After I graduated from college, I went out to visit Rich and Nat and to check out the baby boy of whom they were so proud. Nat took me to Chicago to spend the day. I can still remember how huge that city was, and how much was going on. Me from much smaller Erie, now in Chicago – what a change!

After graduation, Rich taught in several states, and spent many years at A.W. Spalding Elementary on the campus of Southern Adventist University. He not only taught the kids from books, but he played and laughed and came down to their level to get closer to them, to help them achieve, and to live a good life. Many of his former students have kept in touch with him through the years. 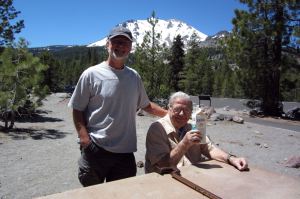 Rich and Nat moved from Tennessee to California where all three of their kids live. Today Rich lives near son Richard, his daughter Linda lives in Sacramento, and his son Bob lives in the mountains near there. I chuckle when I read a note from young Rich such as this one: “I suggested to Dad that we play dominoes in his front yard. He beat me soundly, but I’m eager for a re-match.” He still takes his dad on short trips to appreciate and enjoy the beauties of nature. Then, with his siblings he spends time reading and playing Scrabble, Monopoly, and more dominoes, still working hard to come out on top!

Yes, Rich is one of those people who loves everyone, who does what he can to make the world a better place, and who appreciates all of the blessings that come to him in so many ways. I am more than glad that Rich is my brother! – CHRIS