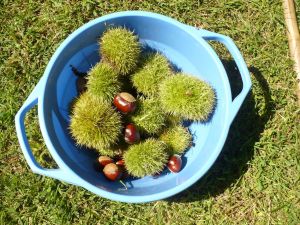 September 24 – Last week when we could see the big burrs still containing the chestnuts, we had no idea that we were losing so many. We didn’t even know that the squirrels were at work again! These days we move out to the tree area early in the morning, hoping to beat the squirrels at the game. Actually, I am beginning to think they stay awake all night so they can win the battle!

Yesterday on the way back from dumping some branches on the burning pile, I stopped at one of the chestnut trees, craned my neck to look way up in the branches at the top, and found just two burrs that were open. Now if they had fallen, the nuts would have popped out, and the squirrel could gloat because he’d beaten us to it once again. However, since I had knocked them out of the tree, I had the first chance! That burr, as I have said, is so prickly and just ready to jab anyone who tries to open it, that I didn’t even bother. Just kicked it into the makeshift rake and deposited it in the garden cart.

Enough black walnuts to keep us busy cracking this winter

So later when we saw one of the squirrels running around on the lawn trying to figure out where to bury his prize, what did he have in his mouth? A black walnut that he stole out of the sand box where they are drying out in the sun! Seems as if these maybe-not-so-cute little guys get lots of fun out of showing us up!

I don’t remember that we had chestnuts to eat when I was a child. The very first ones I can remember eating were those sold by vendors in London, England around 60 years ago in November. We were returning for good to the States from Africa. In the chilly evenings, those chestnuts were pretty good eating, and not only could they warm your insides, but holding them in mittens could keep your hands warm as well.

When I was thinking of writing about this blog on chestnuts, I asked Dale what first came to mind when I said “chestnuts,” Looking at me as if I had lost my reason, he asked, “Well, what sort of thing?” Since he didn’t have an answer, I said just one word, “Poetry.” Now he knew! We began reading to our kids before they could even walk, and poetry was always a good part of the menu. “Under a spreading chestnut tree…” Dale began, and I quickly added, “the village smithy stands.” Together we finished the first stanza:

“The smith a mighty man is he,
With large and sinewy hands.
And the muscles of his brawny arms,
Are strong as iron bands.”

That’s as far as I got before doubling up with laughter. How well I remember our big family of kids as we enjoyed mixing up poetry we learned in school. As we recited this particular poem for Mom, our version of the last line was: “Are weak as rubber bands!”

Some of the poems included The Spider and the Fly; Little Orphant Annie; The Raggedy Man; I Remember, I Remember; Little Boy Blue; Jest ‘Fore Christmas; The Barefoot Boy; The Village Blacksmith; Old Ironsides; Casey at the Bat; Casabianca; The Leak in the Dike; The Wreck of the Hesperus; The Charge of the Light Brigade, and Abou Ben Adhem.

I just thought of something – why not turn off all of the TV’s, phones, computers, iPads, cell phones, and other such equipment, call the family together, turn down the lights, and just read poetry for ten minutes or so? This idea wouldn’t catch on all at once, but if you stuck with it, you might end up liking poetry, and your kids, if you have any, might like it, too. I dare you to try it! – CHRIS