June 16 – When son David arrived Sunday morning, he was laden with all sorts of goodies, as he often is when he comes to visit. However, the main one was a gift for Dale for Father’s Day coming up – gutter guards to put all around the house. Not too long ago he came out to help with the job of cleaning out the gutters because of all of the maple keys and leaves resting nicely in them. Since that time, Dale had to complete a second cleaning due to all the maple keys and leaves.

After spending several hours on the job this morning, climbing up the ladder to put a piece in place, then climbing down, moving the ladder, and climbing again, David finally finished the job, wishing, I’m sure that he didn’t have to move the ladder so often. At the end of the job, he had to climb up onto the roof, and move to the edge where he could barely reach far enough to put the last gutter guards in place. Most of the time I tried to stay out of the way so I wouldn’t have to concentrate on what might happen if he missed a step on the ladder, or reached over too far to put the last bit in place! Faithful Dale held the ladder to keep it steady and handed up the pieces of guard to David. After he had finished the job, David said, “This is a good Father’s Day present for me, too, because now I won’t have to worry about Dad falling off the ladder any more!” 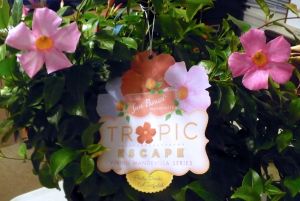 By the time that job was done, we ate breakfast about noon! The main part of the meal was rice which all three of us have counted as a favorite since the kids were little. Dale has his smothered in brown sugar and milk, David uses margarine (like me, he does NOT like butter) and brown sugar, and I settle for a mixture of just plain margarine mixed with soy sauce! Guess how much of that rice I cooked! Enough, according to the recipe, to feed NINE people! As he tried to eat all that was in his bowl, David said, “Boy, this one bowl is more than Darlene and I would eat together!” Oh, well, he had worked hard and was planning on completing other jobs. By the way, Dale and David had really big bowlsful, probably twice as large as mine! 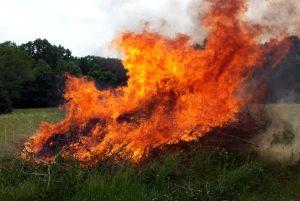 The next job was really not work, just an interesting job that needed to be done. I wrote before about the huge pile of unwanted bamboo canes which were crooked or too small that we had tossed out in the field several months ago, just waiting for the wood to dry. Both David and grandsons Rob and Kevin expressed interest in watching it burn. Sticking a few old newspapers down under the pile, Dale set it afire, and almost immediately flames were shooting way high in the air, while the bamboo popped and popped like fireworks on the Fourth of July. Very fitting to have that fire on Flag Day!

I’m sure that David did not count the watching and pushing the pile together now and again as a job! Ever since he was a young boy, he has enjoyed bonfires, especially when we sat around the fires on our camping trips back in Pennsylvania. Hours later, the fire still continued to burn slowly, but after a heavy rain late in the afternoon, it finally went out. We will have to push the wood together later, and try to finish the job. Rob took a video, while David used his phone to capture the blazing pile. Unfortunately, I was in the kitchen doing up the dishes when I heard the sound of something whishing and whooshing outside. Immediately, I realized that I had already missed the beginning of that fire, so no good photos from my camera! (So any fire photos in the blog will be from David or Rob)

Sour cherries in their natural habitat

Next on the list was another job for David. Dale and I had picked sour cherries last week, but couldn’t reach way up to the top of the tree, so we told David that he could take home all that he could pick. Years ago David and Biz gave us two cherry trees to plant. Since David likes cherries, he asked if we could plant another one that would be his, since he didn’t have room on his back lawn to plant one. Unfortunately, that cherry tree has never borne well as ours have. Must be some reason; maybe it’s lonesome for its owner!

While David filled his bucket with delicious red fruit, Dale and I picked some that we could reach and tried to donate them to him. “No, Mom. I’m picking these myself, I’m going to take the pits out, I’m going to find a recipe on line for good old cherry pie, and I’m going to make one! Don’t know how it will work out, but I want to be able to say that I did all the work without any help. Just show me how to pit the cherries, and I’ll get started before I have to go for baseball practice.”

After waving so long to son David, Dale and I took the pits out of a bucket of cherries we had picked a couple days ago. I froze some earlier in the week, but just didn’t have time for these. Who knows? Maybe I will take another chance on baking a good old cherry pie. If David can do it, maybe I can too! After that first cherry pie I tried to make as a kid, I baked many, many of them, but haven’t done so lately. They are delicious! I think Dale was hinting just the other day that it would be nice to have a good-tasting pie one of these days, especially cherry! We shall see. – CHRIS

Like Loading...
This entry was posted in Around the House, Home Improvement, Yard work and tagged Food, Yard work. Bookmark the permalink.