April 19 – We had kind of a busy day on Friday and got up as early so we could. First off I started the washing and worked on other things in between loads–a total of five of them. Cooked potatoes, making salad out of some and kind of a creamed potato soup (Dale wanted some) from the other. Cooked corn, ground up a couple heads of cabbage for coleslaw, did up all the dishes, and then went out to make good use of the beautiful day we had.

First off, we raked up a ton of dry grass left over from mowing earlier in the week. Dale carted it back on the tarp to the blackberry patch where I thought it would make good. He ended up with about six piles on the tarp which he dragged off one at a time. Then I took down all of the clothes, folded, etc. and then ironed all seven of the aprons I washed before going off to the strawberry patch to weed for an hour or so. Dale helped me by finishing the rows he had been working on earlier this week. I had four 5-gallon bucketfuls and then two more as I cleaned out the weeds on both sides of a garden fence. Poor Dale’s feet and legs were in bad shape by then, so he finally quit. 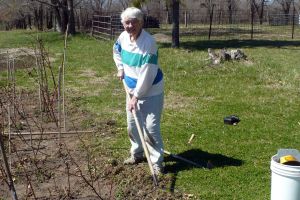 Making sure the blackberry patch is free of weeds pre-mulch

I picked the asparagus, and when I went over to the two plants by the blackberries, I wondered how the mulch would look in the bed. (Dale had left the three big loads outside the patch to do later.) Dumb me – always wanting a job to be finished before I quit! Just wanted to see how nice the patch would look when the job was done, so after I tossed in a few armfuls of mulch and saw how nice it looked, I figured I could do the second pile too–and then the third–so the job is done; I hope the henbit enjoys being covered up by the mulch! I weeded that place last week, and it looked so nice without all of the weeds. Now the few that came back again have disappeared under the mulch, hopefully for good! – CHRIS