Old Glory in the snow

February 21 – As of Friday morning, we had received a five-inch snowfall, just about the same number of total inches as had fallen through all of the winter this far! No, I didn’t throw in those figures because I thought that was a lot of snow. All I could think of was the winter the folks back east and on up the coast are having this season. Up to ninety-plus inches! We saw beautiful photos of a frozen Niagara Falls on TV this morning, and heard that the folks down south, especially in Nashville have had so much ice that lots of damage has taken place. We thought, too, of our friends in Florida where the temperature is so low that the orange growers are having to protect their crop. What happened to Global Warming?

More snow came down pretty hard in the afternoon, but nothing, nothing at all like that in Boston, New York, or even conditions down south in Nashville. We are warm and happy here on our eighteen acres, and enjoying blessings so abundant. But are we ever really satisfied? Yes , I think so, but I did say to Dale as we had packed away our groceries in the truck, “You know what? This morning you said you would like to see some green grass for a change. Well, the snow will melt, and you’ll have your green grass, but come the middle of August, when we are tired of mowing and digging and planting, we might ask, ‘Wouldn’t it be nice to have this all cleaned up, so we won’t have to mow again till next year?” So are we ever really satisfied? Ha!

Our cat has formed a strange habit since the snow arrived. If she hears me go into one of the rooms where the heat vent can be reached very easily, she begins by rubbing against my legs as she usually does when I stay in one place for more than a second or two. After she feels loved and spoiled enough, she moves over to the vent, plops down on the floor in front of it, then stretches out on her back, rolls her body over to the vent and the lovely warm air that comes out of it, sticks her feet up in the air, and enjoys a quiet rest. 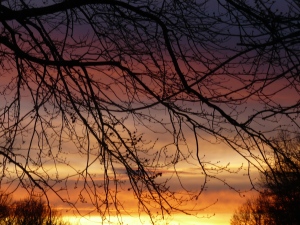 At other times, we can hear her racing across the living room into the hall and then without stopping a second, leaping into the bath tub where she starts her usual routine of Chase My Tail! Round and round she goes and finally, decides she has had enough before she drops down for a rest. And speaking of rests, even the sun has to take a rest once and awhile. It’s sunset time in Missouri… – CHRIS