Four inches with more to come 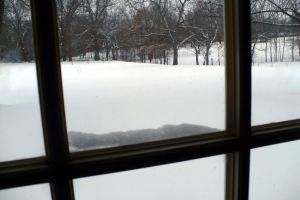 Snow out our back window

February 16 – As of this morning, we have about four inches of snow to gaze at while being very thankful that we don’t live “back East” as we did for forty years before we moved out here to Missouri! Oh, how well I remember those winter days of long ago, first as a little kid, and then after several years in Africa, back again to Pennsylvania where “lake effect” snows brought many feet (notice that I did NOT say INCHES) of the “white stuff” for us to enjoy. Can’t say I always did enjoy the snow after I stopped making snow balls and snow men, and sledding down the hills, but I do know that I don’t enjoy it now. Beautiful sparkling white, yes, but cold and full of problems.

Great news to the kids in the area, as today, being President’s Day, doesn’t demand their presence in school. As a result, they will have lots of hours to make snow angels, slide down the hills on a saucer, make a snowman (maybe not that, though, as the snow is powdery, rather than wet), and just have a good time. In our day we could beg our ma and pa to enjoy the sliding with us, and often they did, but today the parents are so busy at work that they often can’t spare the time.

Stars and Stripes on President’s Day

The snow began last night, and as I looked out the back door I could see the flakes swirling round and round, making a pretty pattern around the light, and covering the grass bit by bit. First thing this morning when I got up to check on the amount of snow that had fallen during the night, I was surprised to find about four inches, with everything around the yard, over to the pond, back to the barn, and across the fields to the neighbors’ house, completely covered. That was an unusual sight, because we hadn’t seen that many inches all winter long. We often wonder how in the world those poor folks up in Massachusetts and Maine, and even in our Pennsylvania, manage to live from one day to another. Roads and highways blocked, winds so strong people are blown over, the snow so deep that roofs cave in, and so many other problems.

Not one bird at the feeder this morning, no blue jays, woodpeckers, no juncos, not even one of the thirty cardinals I counted last night. That picture changed as soon as Dale got up and cleaned the snow out of the feeder and around it. Immediately after throwing out handfuls of millet and sunflower seeds, even before he opened the door and came back into the house, the birds had arrived! How did they know about that meal awaiting them? Back came the flocks of hungry cardinals and juncos along with the other birds who enjoy the “store-bought feed.”

Since I wanted a nice snowy picture of the Stars and Stripes, I went out onto the front porch to get one. Pretty cold out there at ten degrees, so I didn’t stay long. Wouldn’t you know?” Just as I opened the door to come in, out shot the cat! Her tiny footprints were very easy to see as she made her way through the snow and between the porch pillars. About a foot into the snow, and she quickly turned around and rushed over to the door waiting to be admitted to the warmth of the living room! She has formed a new habit now; when the furnace turns on and blows warm air through the vent in the bathroom, she throws herself down in front of it, and lolls around there until the warm breezes stop till the next time.

This morning I read the following about winter: Dawns and sunsets in winter are especially lovely because they are so “noticeable.” One can enjoy them from a window where the view is not hidden by leaves. A peach and turquoise sunrise seen through brushy treetops, or a ruddy reflection of the setting sun in the creek, can quicken one’s senses. Even dark, icy February is not without asset. Because of February’s cold nature, housecleaning, dog bathing, car washing, and yard care make no demands. Now is the time to enjoy new books.

Dale heartily agrees with that last sentence, as he reads by the hour, resting his poor sore toes thanks to the removal of ingrown toe nails. I spend time every day reading from the Bible. One of my favorite promises is that given by the prophet Isaiah,”. . .though your sins be as scarlet, they shall be as white as snow; though they be red like crimson, they shall be as wool.” Some part of the day I work with the Crossword Play puzzle book our son bought me for Christmas. Sad to say, I’m almost done with it!

So, even though we don’t get outside a lot in the winter, especially when the snow comes, we have much to do without spending every day cutting down bamboo canes! – CHRIS

Like Loading...
This entry was posted in Around the House, Photography and tagged Birds, Cat, Indoors, Nature. Bookmark the permalink.