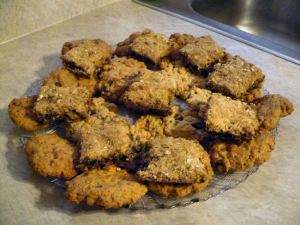 November 24 – I started baking cookies about 7:30am Sunday because I wanted to have them ready to take to church that afternoon and had a number of other jobs to take care of. I had made several kinds of cookies on Friday, but was not sure which kinds I wanted to take. There were mincemeat drop cookies, mincemeat bars, and double oat breakfast cookies, much like chocolate chip/peanut butter, only several cups of Cheerios are added to the mix at the end. I think I left the Cheerios ones in a bit too long, so decided to make another batch this morning. Although we were asked to take a dozen cookies to exchange for any of those that others brought, I took the three kinds I had made, all spread out on a beautiful glass platter. 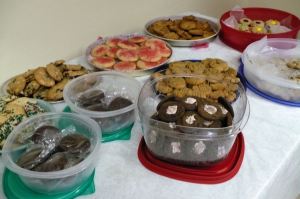 More cookies than we knew what to do with!

I definitely am not one of those cooks who knows how to make foods look beautiful and scrumptious, so those who choose them need to believe they taste better, maybe, than they look! My German Mom was like that. She hardly ever used a recipe for anything, but knew just how much to toss into the mix, and those who had ever tasted her grepples, any kind of pie, corn pudding, or kuchen knew that it would pay take a second helping in the beginning, as there might not be a chance for another!

Fifteen ladies showed up at the church, each with a plate of cookies and a present for their “secret sister”. At the beginning of the year, the church women picked a “name from the hat,” and were given a list of likes and dislikes of the person they had chosen to be their “secret sister.” All through the year nicely wrapped gifts or gifts buried in a large amount of lovely tissue paper were sitting on the bench in the foyer with the name of the recipient on a tag. Astonishment appeared on the faces of some who were so surprised to see who their sister really was, as they had guessed it must be someone else. Three of the ladies were sure that I was their sister, but only one guessed correctly. One mother had her teen daughter’s name and enjoyed the entire year buying things she knew would really be appreciated!

When I drove into the driveway coming home, Cat jumped down from her perch high off the floor, and scooted behind the truck and outside. First time I have seen the little feline since our last walk. When we first started our, she didn’t come along as she had done previously. But at the bottom of the little hill down by the creek, we turned around, and there came Cat rushing at full speed to catch up. Just a bit after that she disappeared, and we didn’t see her at all afterward, not last night, nor this morning. Good to see her again. 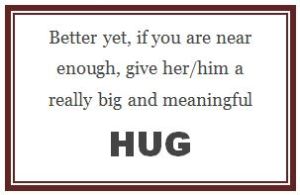 As we look forward to Thanksgiving, this season of giving and appreciating what we have, please take time to thank someone who has been a friend to you in one way or another this year. Send off a note or card or make a phone call. Better yet, if you are near enough to do so, give her/him a really big and meaningful hug. Things like that are never forgotten, but can be remembered when our day is not as bright as it might be.

And speaking about Thanksgiving, we were proud once again this year of our son who is a real speedster as far as writing poetry is concerned. When he goes to church the weekend before Thanksgiving, he hands out pieces of paper for people to write down something they are thankful for. After they are collected, he goes off by himself and writes new words to be sung to the hymn tunes of Now Thank We All Our God, Let All Things Now Living, and Come, Ye Thankful People, Come. By the time the preacher has finished his sermon, the ladies’ trio is ready to sing the words that have been arranged by the poet in residence. He told us that this year was the 21st edition. That’s a lot of new verses! – CHRIS

Like Loading...
This entry was posted in Other, Poetry and tagged Cat, Food, Poetry. Bookmark the permalink.