The cat and the clock

November 20 – Have just been sitting around this week, waiting for spring to get here. It appears to be in no hurry. Chris has been downstairs sorting tomatoes again, and will be cooking up some in the kitchen. All the green ones we picked have turned ripe, she says. We have let the cat in the house for a while this morning. It has wandered around a bit but seems content to lie on the floor and for a few minutes it took over Chris’s easy chair. Last I saw, it was lying on the piano bench. If it gets too bored I shall give it some CATalogs to look at… Just now it went over to that large clock I have sitting on the floor where I can see it easily from my chair and eating table, and began batting at the minute hand with its paw. It had a fun time, and finally reached around behind the clock, perhaps to discover what the power source was. The clock immediately fell over on the cat, who rushed off to safety as fast as only a cat can go. 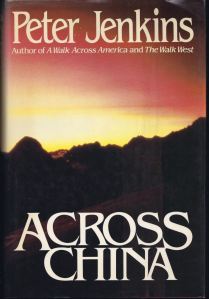 I am in the process of reading the book Across China by Peter Jenkins, in which he starts out going to Tibet with a group planning to climb Mt. Everest from that side. They had lots of problems acclimating themselves to those high altitudes and I don’t think I would care at all to be that high up in the air. Peter was there as a writer and not as a climber, so he in due time backed down and flew off to China. Right now he is in a much warmer part of the country and getting used to their foods, many of which sound gross and inedible and unhealthy.

Someone from church has asked us to write a poem for the coming Christmas program, so I guess we have a little work to do. Chris thinks we wrote one for last Christmas but we can’t find it. I once wrote one about cats, using the word CAT in every way I could think, but would have to go through all of my scrapbooks to find it. And there are a lot of them! 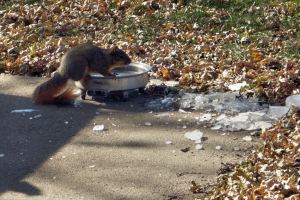 Chris would like to be out getting some exercise and fresh air but I say it is still too cold out there most of the time. The water dish for the birds and squirrels is frozen much of the time, so I go out three or four times each day to break the ice and put in warmer water so that the birds can have a drink to wash down the seed they eat.

So, I’ll just get my exercise by going out to the mail box to pick up TWO days of mail. Chris wants to see the grocery ads, of course, as we’ll be going to Pleasant Hill today. I must remember to get some more cat food (actually dog food, which is cheaper). Chris is wondering what kind of cookies she should make to take to the Secret Sisters gathering and cookie exchange this next Sunday. I say date and nut, but we are short on dates, despite having all these calendars lying around. Speaking of such, my mom used to make a date and nut cake that was very good. She used to make sour cream gravy and junket, which I liked, but it seems to have pretty much fallen out of use and sight.

I probably should go out and check our tire pressures, as in this cold they are probably a bit low, but I hate to face the cold. Should I trust to luck? We’ll need four filled tires for Pleasant Hill. Will just drive slowly, I think.

Like Loading...
This entry was posted in Animals, Around the House and tagged Cat. Bookmark the permalink.

1 Response to The cat and the clock